Today I ran into one of those situations where my cloud service worked just fine running locally in the Windows Azure Emulator but failed when I published to Windows Azure, resulting in this infamous page being rendered in my browser.

It’s tempting to jump right into the various techniques for debugging cloud services. Especially the latest Remote Debugging feature. While effective, these techniques can be somewhat heavy handed approaches requiring you to publish a debug build instead of a release build or preconfigure some diagnostic settings. When I am doing basic acceptance testing, I prefer to do so using a release build. After all, that’s what I will ultimately deploy to production. I also tend not to enable any diagnostic settings by default. Again, not something I would do in production unless necessary.

When troubleshooting an issue it’s generally a good idea to start with the least invasive approach and bring out the big debugging tools only if necessary. This is especially true if you are ever debugging a production environment.

In this post, I’ll walk through the simple process I took to determine root cause. The issue is not really important. Well, maybe it is for some MVC developers out there. For this post though, it’s primarily about the process.

So, I published my cloud service, consisting of an MVC Web Role and a Web API Web Role, and got the Runtime Error above.

Thanks to the service management extensions in Windows Azure, I went directly to the Windows Azure Portal. Then, I went to the CONFIGURE tab for my cloud service and clicked the REMOTE button at the bottom of the screen.

In the Configure Cloud Service window, I enabled Remote Desktop (RDP) for just my MVC role. 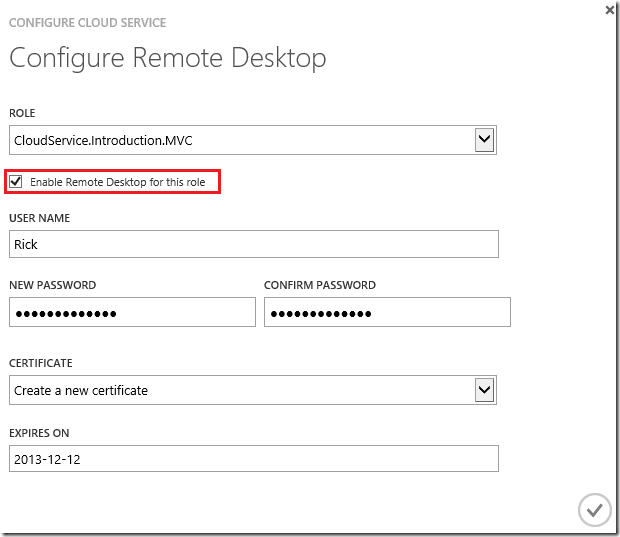 Remote Desktop into the MVC Instance

After about 3-4 minutes RDP was ready to go. Next, I went to the INSTANCES tab for my cloud service and clicked on the CONNECT button at the bottom of the screen.

I logged in using my user name and password (from above) and went directly to the Windows Event Viewer where I quickly found the ASP.NET event I was looking for.

The details for this event were all I needed to see.

So that’s it – I’ve determined root cause in a matter of about 5-6 minutes. Just to re-deploy a debug build would have taken longer.

So, it turns out that Microsoft.Web.Infrastructure is in the Global Assembly Cache (GAC) and that’s where it was loading from when I ran it locally. This was put there during my installation of Visual Studio.

For this to run in Windows Azure, the fix is simple. Just add the Microsoft.Web.Infrastructure package using the Nuget Package Manager in Visual Studio.

Build and re-publish the service and I’m done.

I’ve published many MVC applications to Windows Azure successfully. Why was this one different? Well, I did create this application a little differently than past applications. For this one, I started with the Empty template and checked the option for MVC folders and core references.

However, if I choose the MVC template (which most people do most of the time), then that package reference is there by default.

The Windows Azure Platform has a rich set of features and tools for troubleshooting applications. However, start with the least invasive techniques first and build up. Sometimes you will get lucky and find your problem in just a few minutes like I did here.