The Management Portal for Windows Azure provides a nice user experience for many service management operations such as creating cloud services, storage accounts, virtual machines, virtual networks, and so on. If you want to automate such operations, then the Azure PowerShell Cmdlets are a great choice and you can find a plethora of examples on how to use them on my close friend Michael Washam’s blog. On the other hand, if PowerShell is not your thing and you would prefer a C# approach, then the Windows Azure Service Management REST API’s are available for you. Using the REST API’s gives you full control, but at the expense of some added complexity.

In this post, I’m going to show how to use a few of these REST API’s in a way that you can re-use – much like you would a client SDK ( hmmm, that would be nice ). I’ll cover enough to demonstrate use of common HTTP verbs such as GET, POST and DELETE and show how to serialize complex structures the API’s use so you don’t have to create or parse XML.

To demonstrate, I’ve limited the scope of my solution to just three C# libraries (DLL’s), two of which use a small part of the Service Management REST API’s for Cloud Service and Data Center Location operations.

ServiceManagement is the base library for the two other libraries, providing basic requirements for any Service Manage REST API.

As you can see, I also created Unit Test projects for each of these libraries so you can see how the different libraries might be used in client code. In similar fashion, the ServiceManagement.Tests project is the base for the other two test projects. Later, I will cover how to run the tests.

The ServiceManagement project defines a base class, BaseApi, that the other two projects ( and potentially future projects ) derive from. It encapsulates some basic things that all the REST API’s need such as a valid Azure subscription, a base URI for web requests, and an HttpClient that already has the Azure subscription’s management certificate added to the client certificates collection for authentication. It does a few other things, but these are the main parts.

With this base library in place, I’ll transition now to implementing the libraries that will call the various Service Management REST API’s.

The Operations on Locations is very simple with just one operation, List Locations. It returns a list of data centers available to your subscription and a list of available services for each data center. The request is a simple GET request that returns XML that could be serialized into a complex structure.

To support serialization into a structure I can code against, I defined three classes according to the REST API documentation for this operation. 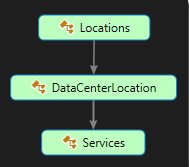 What you have to be careful about are how the classes are named, the namespace, and the order of properties. If any of this is off then the data won’t serialize into the structure, even though it was returned in the underlying XML. This is where the DataContract and DataMember attributes come in handy. I decorated the classes with the necessary attributes according to the documentation so that the response will serialize correctly.

Now that the model is defined, the implementation of the LocationsApi is quick and to the point.

Although there’s not much to it, I’ll explain the main points.

Using the LocationsApi in Client Code

This is an example of client code using the LocationsApi to get a list of data center locations.

And here is the output for one of the six data centers returned for my subscription.

Personally, I like this a lot better than parsing XML.

The Operations on Cloud Services is a little more involved and has several operations. For the sake of this blog, I’m just going to focus on two operations; Create Cloud Service and Delete Cloud Service. I chose these because they provide small examples of API’s using POST and DELETE http verbs.

This time, I’m defining a model that I can POST to the REST API’s to create a cloud service. So, continuing in similar fashion, I defined a class, CreateHostedService, to support the minimum requirements needed to create a cloud service. Notice that I said “minimum”. These API’s can get extremely complex quickly. For the sake of demonstration, I’ve limited my code to handle just these minimum requirements. Feel free to contribute to my project on github if you want to build this out further.

Here again, a pretty trivial implementation with everything else in place.

Like before, here are the main observations in this class library.

Using the CloudServicesApi in Client Code

This is an example of client code using the CloudServicesApi to create a new cloud service and then delete it.

Notice in this code that I’m also making use of the LocationsApi to pick a data center that’s available for my subscription and in the US.

And here is the output. I know the name is not very user friendly, but at least it’s unique!

So, there you have it. A few examples using Service Management REST API’s from C# using models to serialize and de-serialize complex structures. Extending this to support more complex API’s is largely going to come down to defining the models. The code to call the REST API’s is pretty short when you have a model to pass to and from the library.

I’m going to wrap things up now with a quick review of the Test Projects.

If you know me or have read previous posts, you know I don’t like writing client applications just for the sake of testing other code. So, I’ll try and use test projects when possible to avoid this. Plus, it’s just good development practice to do so.

All that is needed to configure this for your environment is to replace the subscriptionId and certThumbprint in the BaseApiTest.cs file.

As I indicated earlier, all the test projects derive from this BaseApiTest class (just like the REST API’s projects). So, once you set this all the other test projects are good to go.

You can find these values in your Windows Azure Portal in the Settings tab. The management certificate must also be installed in your personal certificates store in either CurrentUser or LocalMachine. 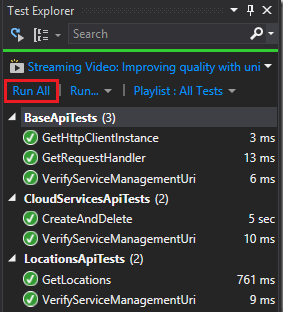 View the Output of the Unit Tests

Most of the tests I’ve written just write data to the Console as you saw previously. You can view this output by clicking on the test you’re interested in and looking for the Output link.

If you don’t see an Output link for a test, it’s just because I didn’t write anything to the console in the test code.

In this post I showed how to program against the Service Management REST API’s using C#. I gave examples of how you can build models to pass data to/from the API’s that will make programming against them in client code simpler and more intuitive.