The Azure Redis Cache is a fully managed dedicated Redis cache that can be used to increase the performance of your cloud applications. It is offered in three tiers: Basic, Standard, and Premium with each tier offering various features and capacity you can choose from.

In this post I will demonstrate how you can use the Azure Redis Cache in your application with an emphasis on some of the features unique to Redis.

In the Azure portal, search for and select the Redis Cache in the Azure Marketplace. In the New Redis Cache blade, provide a unique DNS name. Next, select the pricing tier (see Figure 1 above for tier choices, the resource group your cache will belong to, and the location. You should strive to select a location that is in the same region as the services that will use the cache for best performance. The DNS name for your cache will be {cache name}.redis.cache.windows.net. 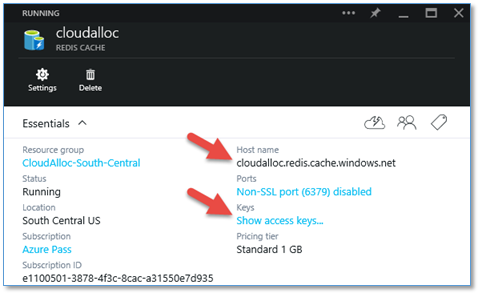 Create a client application to use the Redis cache

The code I’m going to show in this section is running in a simple console application. This is intentional to keep the focus on using the Azure Redis Cache. However, the code can be used in any application of your choice after installing the Redis Client Library from Stack Exchange.

The Redis Client Library I’m using is from Stack Exchange and is available as a NuGet package as shown here.

Before I transition into the code to add/retrieve items to and from the cache, I want to mention another NuGet package that may be useful if you’re developing web applications, which is the RedisSessionStateProvider. This will provide easy support for caching ASP.NET sessions if you need it. However, it is not a topic I’m going to cover in this post.

Connect to the Azure Redis Cach

In my code, I can retrieve these settings to connect to the Redis Cache as shown here.

Now that I have my connection established, I can start adding items to the cache. In the code below, I’m demonstrating four things:

The output of the application is show here.

In this post I introduced some basic principles of the Azure Redis Cache. I showed how to create a cache using the Azure Management portal and then how to use the .NET Client Library from Stack Exchange to add, update, remove, and retrieve items in the cache.